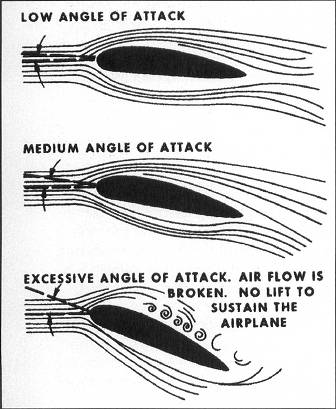 In order to talk about spins we have to first talk about stalls. A stall in aviation is caused when the angle of attack increase to a point at which lift decreases. Which means that there are varying levels of loss of lift in a stall. The stall point (critical angle of attack, or stall angle of attack) varies from plane to plane. In IL2 we see stall angles as low as 9 degrees and as high as 22 degrees above plane.

Note in the picture that angle of attack is not necessarily the horizon. Your horizontal plane is determined by the direction of the airflow over the wing.

Usual signs you are approaching the critical angle of attack are a drop in air speed, sluggish controls, and buffet (shaking) in controls. In a sim you most likely don't have the feed back that you would in real life, because of this you need to pay close attention to the planes response to control input, nose angle, speed, and any visual cues (shaking). This is part of understanding the limitations of your machine.

Use resources such as this one to help know your stall speeds, angles, and general limitations.

We will have you fly at altitude in landing configuration and intentionally stall to have you experience the signs in game of a stall during landing. Landing a plane is effectively walking the fine line between stalling and flying, so getting a feel for your plane is essential. 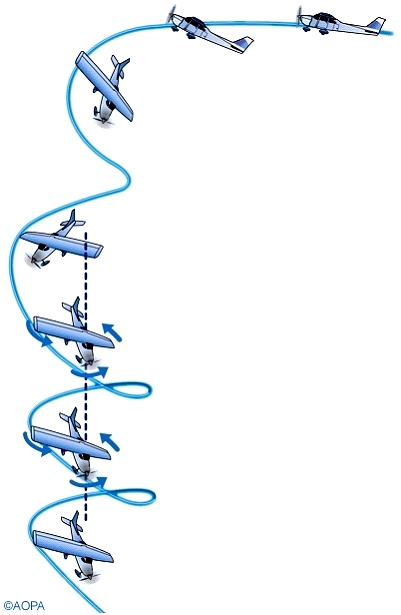 Given the above, we know that the loss of lift in a stall can vary. In a spin one wing has significantly less lift than the other wing. This causes the plane to enter the spin, which is a corkscrew downward path with stabilized speed, path, and rotation rate.

Phases of the Spin

The easiest way to enter a spin intentionally is to go into a climb and decrease throttle. Just as you feel the plane begin to stall apply aggressive rudder (left or right) to enter a spin (left or right). Make sure your climb isn't too steep, else you may accidentally perform a hammerhead or stall turn instead. Worth noting that it is easier to develop your spin if you yaw with your engine torque. In other words, yaw left in a BF 109.

Once you feel your plane tip in the direction of your spin you have entered the incipient stage of the spin. You can exit from this stage if you are quick enough. If planned properly you can use an incipient spin to quickly loose altitude and change direction.

Recovery from a Spin

If you return your controls to neutral this should allow your spin to enter the developed stage. This stage is what killed many a pilot in the early days of aviation. This is usually when most panic pulling back on the stick, only exacerbating the spin. You instead do what is opposite of your initial instinct.

The correct way to recover from a developed spin is to remember the acronym P.A.R.E: